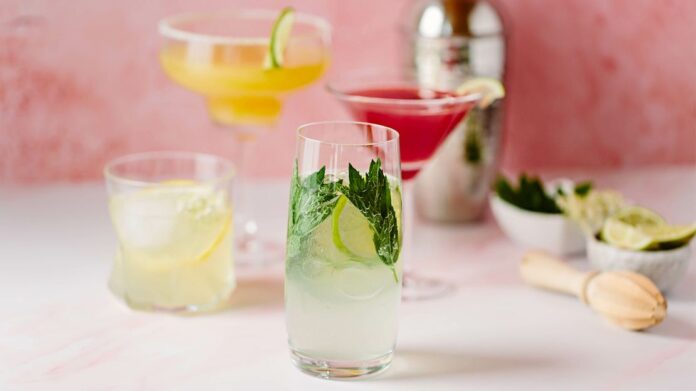 Alcohol consumption is on the rise, even though happy hour at bars and restaurants is on hold in many parts of the world. When COVID-19 stay-at-home orders went into effect back in March, during just one week, national alcohol sales increased 54 percent compared with the same week in 2019, and three out of every four adults began consuming alcohol one more day per month year over year

1. Red Wine (105 Calories per 5 oz Serving)
Enjoying a glass of red wine with dinner has long been considered a “healthy” move because of its purported heart-healthy benefits. According to Harvard Health Publishing, the idea can be traced back to the 1980s. And though there’s never been a long-term randomized trial that proved some of these claims, a dry red wine (like a Cabernet Sauvignon or Syrah) is one of the lower-calorie adult beverages you can reach for, Zanini says. A 5-ounce (oz) glass of red wine has about 105 calories, according to the Cleveland Clinic.

2. Light Beer (96 to 100 Calories per 12 oz Serving)
If you’re in the mood for beer, go light. It’s another low-calorie option, Zanini says. You’ll save about 40 to 55 calories in a 12 oz serving compared with a regular beer, according to the Cleveland Clinic.

3. Dry Vermouth (105 Calories per 3 oz Serving)
A 3 oz serving of dry vermouth contains 105 calories, according to MedlinePlus. And while you’ll generally find it mixed into a martini or a Manhattan, you can save calories by sipping it neat. The reasonable calorie count isn’t the only reason to reach for it. Some research has found dry vermouth contains significantly more polyphenols than white wine. Polyphenols are naturally occurring compounds in plants that have been shown to help regulate metabolism, weight, and chronic disease, according to a study published September 2018 in Frontiers in Nutrition. Keep in mind, however, that there haven’t been any peer-reviewed human studies on the health benefits of drinking dry vermouth, so it’s unclear whether this possible benefit outweighs the general risks of drinking alcohol.

4. Booze on the Rocks (About 100 Calories per 1.5 oz Serving)
Whether you’re into vodka or tequila, gin or whiskey, there’s no real difference in calories or carbohydrates — they all have about 100 calories in a 1.5-ounce serving, according to MedlinePlus. Your best bet when sipping alcohol is to have it straight, or with sparkling water or club soda, Zanini suggests. That’s because a whiskey drink, for example, can quickly go from a 100-calorie drink to 300 plus when you add sugary, high-calorie mixers.

5. Champagne (85 Calories per 4 oz Serving)
You’ll save about 35 calories per serving by choosing bubbly over a sweet white wine, according to MedlinePlus. A 4 oz glass of Champagne has 85 calories. And while that might not sound like much, it’s also possible that you’ll feel fuller and turn down that second drink as a result of the carbonation. A small study published in the Tokyo-based Journal of Nutritional Science and Vitaminology found that women reported feeling more full after drinking sparkling water compared with flat.

LOSS WEIGHT WITH THESE 11 HEALTHIEST DRINKS