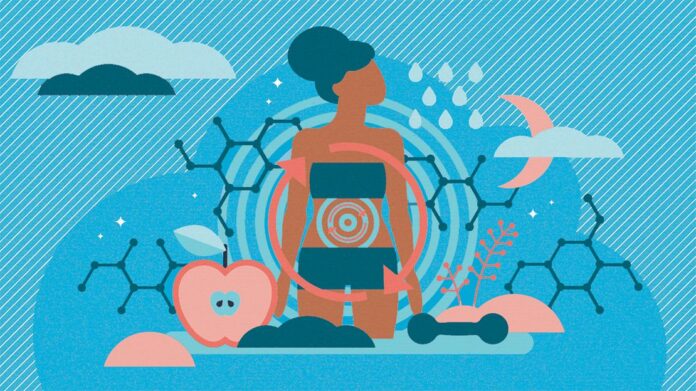 If you’ve ever struggled with the numbers on the scale, you’ve probably blamed it on your metabolism. But what is metabolism exactly, and how does it work?

The term metabolism refers to all the processes in the body that use energy, according to the National Institutes of Health, but the word is most commonly used when we talk about weight. “When someone says, ‘I have a fast metabolism’ or ‘I have a slow metabolism,’ they’re usually referring to their ability to lose weight or maintain a normal weight,” says Caroline Cederquist, MD, a bariatric medicine specialist in Naples, Florida.

Most people can increase or decrease the rate at which they burn calories throughout the day, but many don’t know how, or that their biological sex, daily habits, and even health status affect their metabolism.

1. It’s Really About Your Basal Metabolic Rate, or BMR
Metabolism can refer to any of the chemical processes that take place in your body, but what most people are interested in is their BMR — how much energy you use every day just to stay alive. BMR accounts for roughly 65 to 70 percent of your total caloric expenditure, according to the National Strength and Conditioning Association.

Online calculators can estimate your BMR, but they don’t consider your muscle-to-fat ratio, Dr. Cederquist says. (As you’ll read next, your levels of lean muscle matter.) If you’re interested in a more accurate figure, consult an obesity specialist for a calorimeter test, which measures the amount of carbon dioxide you breathe out, to determine your BMR.

2. More Muscle Equals Higher Metabolism
More muscle mass in your body translates to more calories burned, even at rest, according to the National Institute of Diabetes and Digestive and Kidney Diseases (NIDDK). That’s because, simply at rest, each pound of muscle on your frame expends about six calories per day, explains Tim Church, MD, PhD, a professor of preventive medicine at Pennington Biomedical Research Center at Louisiana State University in Baton Rouge. On the other hand, a pound of fat churns through about two calories.

The most efficient way to build muscle: strength training. A study published in July 2015 in the European Journal of Clinical Nutrition found that nine months of strength training three times per week raised people’s resting metabolic rate by about 5 percent. Haven’t exercised in a while? Working with a certified personal trainer is a great way to learn safe, effective exercise strategies that work for your unique body and needs. The American Council on Exercise professionals finder is a great resource to find experts near you.

3. Eating More Protein May Boost Your Metabolism
Did you know that digesting food burns calories? And of the three macronutrients — carbohydrates, protein, and fat — protein burns the most. Research shows that increasing protein intake temporarily boosts metabolism by roughly 15 to 30 percent.

But more than that, a protein-rich diet encourages healthy levels of lean muscle mass to increase basal metabolic rate. Good sources include lean meats like chicken and fish, Cederquist says, along with dairy, whole grains, beans, lentils, and nuts. For the best effects, spread protein intake throughout the day.

4. Men Tend to Have Higher Metabolisms
Men usually have more total body mass, muscle, and higher levels of testosterone, all of which influence calorie burning, Cederquist says. Research shows that, in the first months of a weight loss regimen, men can lose twice as much weight as women.

This can be particularly disconcerting if you’re a woman trying to lose weight with a male partner, but don’t let it dissuade you, she says. If you’re losing weight more slowly than your partner, remember that’s not necessarily a sign that you’re doing anything wrong. Each body works uniquely — focus on yours.

5. Menopause Can Reduce the Rate of Metabolism
Menopause can lower the body’s calorie-burning ability. When women go through menopause, lower estrogen levels can reduce their metabolic rate, explains Cederquist. It can also cause them to accumulate more belly fat, which research shows further influences metabolism. And further research demonstrates that age-associated declines in muscle mass, called sarcopenia, can make matters worse.

The most effective way to lose fat and preserve muscle during menopause? According to a July 2018 review published in Menopause, combining diet and exercise is more effective than either strategy on its own. When it comes to diet, prioritize frequent, small, high-fiber meals, according to a March 2015 study published in Menopause Review. Keep daily protein greater than 0.36 grams per pound of your ideal body weight, researchers urge

6. Many Health Conditions Can Influence Metabolism
Sometimes specific illnesses or their medications can affect the speed at which you burn energy. For example, according to Harvard Medical School, insulin resistance, unhealthy thyroid function (untreated hypothyroidism), as well as certain medications can affect metabolism and cause weight gain. Some antidepressants, epilepsy medications, steroids, and blood pressure–reducing medications are linked with weight gain, according to the University of Rochester Medical Center.

If you’re concerned about your ability to lose weight, ask your doctor to explore any potential issues at your next visit. You can also ask for a referral or reach out directly to an obesity medicine specialist.

7. Vitamin D May Affect Metabolism
Vitamin D is usually touted for its contribution to bone health and sunny moods, but research has shown that it could also play a role in metabolism and weight change. For example, in one previous study, when vitamin-D-deficient women got their blood levels of vitamin D to recommended levels, they lost more weight. Potential signs of vitamin D deficiency include bone pain and muscle weakness, according to the National Institutes of Health. Even if you take vitamin D supplements, don’t assume your levels are where they need to be. In the study, when woman took supplements, they each absorbed different amounts of the vitamin.

To determine your levels, talk to your doctor. All you need is a simple blood test, according to the National Institutes of Health.