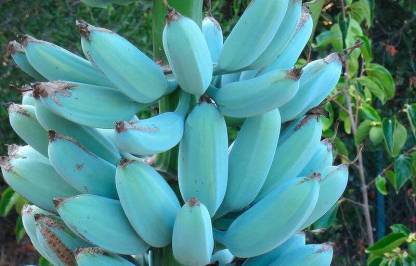 Recently, a photo of a blue banana has gone viral on social media and honestly, it is beyond believable. And to add to the curiosity, the user who posted the picture on Twitter also mentioned that the blue banana totally tastes like vanilla icecream. Yes, you heard us right! Did you ever in your wildest dreams think that a fruit could actually taste like ice cream? Well, it is incredible that nature has its own ways of doing things

What Is A Blue Banana?

Blue Java banana, also known as ice cream banana or Hawaiian banana, tastes like vanilla ice cream and it is the best gift that mother nature has given to mankind. Don’t you think? These bluish-green skinned bananas are giving our average Cavendish bananas a run for their money, because who wouldn’t choose ice cream bananas for their protein smoothies, right?

Fmr Co-Chairman Tham Khai Meng took to his Twitter account recently to share incredible pictures of blue bananas. He shared the post with the caption that read, “How come nobody ever told me to plant Blue Java Bananas? Incredible they taste just like ice cream.”

Blue Bananas Are Just A Flight Away

This unusual fruit is cultivated in Hawaii as well as parts of Southeast Asia and Central America. Interestingly when ripen, these bananas offer a fluffier, creamier texture than your average supermarket bananas. Can’t wait to taste it already! These ice cream bananas, grown in Hawaii since the early 1920s, don’t contain any artificial sweeteners, flavours or additives. Just imagine the delicious desserts you can make from this variety of fruit.

This is undoubtedly one of the best gifts from the mother nature. Tell us what you think about this unusually incredible fruit. Have you ever tried it before?

5 Indian Superfoods You Must Eat ft. @Abhi and Niyu