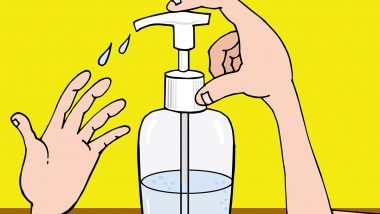 Cancer-Causing Benzene Found in Many Hand Sanitizers Made Amid Pandemic Shortages, Here’s a List! Know More About This Known Human Carcinogen as Dangerous as Asbestos

Cancer-causing benzene was found in many hand sanitisers that were made amid pandemic. These hand sanitisers are being warned against as they have a high level of a known carcinogen known as benzene which is said to be dangerous asbestos.

Cancer-causing benzene was found in many hand sanitisers that were made amid pandemic. These hand sanitisers are being warned against as they have a high level of a known carcinogen known as benzene which is said to be dangerous asbestos. The survey was carried out by Valisure which is an online ppharmacy based in New Haven, Connecticut. They tested out 260 hand sanitiser bottles from 168 brands and about 44 batches or 17%, had detectable levels of benzene. This carcinogen linked to certain blood cancers such as leukaemia

Twenty-one bottles, 8%, had levels of benzene above the FDA-recommended limit of two parts per million. One bottle, from company artsnatural, had 16.1 parts per million of benzene, eight times more than the recommended limit Valisure has sent a letter to the FDA asking the agency to recall the batches and to conduct its own analysis. Some hand sanitisers that popped up during the coronavirus pandemic to help meet the demand, contain high levels of a cancer-causing chemical, a new analysis finds

“The presence of benzene, a known human carcinogen, and multiple other contaminants, in products widely recommended for the prevention of spreading the SARS-CoV-2 virus causing COVID-19 and regularly used by adults and children in large volumes makes these findings especially troubling,” Valisure wrote in a letter to the FDA.

What is Benzene?
Benzene is a liquid chemical that is typically colourless but, at room temperature, can become a light yellow colour. It is naturally found in volcanoes and as a result of forest fires but is also used to make several products including detergents, dyes, lubricants and rubbers.

Being exposed to high levels of benzene can cause cells to not work correctly such as causing one marrow not to produce enough red blood cells or damaging the immune system to lose white blood cells, according to the CDC. The World Health Organization’s International Agency for Research on Cancer has identified benzene as a carcinogen, putting it in the highest risk category, Group 1, with other chemicals such as asbestos.

Benzene has been linked to blood cancers such as leukaemia Hand Sanitizers With Highest Levels of Cancer-Causing Benzene: artnaturals Scentsational huangjisoo TrueWash The Crème Shop Star Wars Mandalorian Body Prescriptions Born Basic beauty concepts PureLogic The FDA currently recommends a limit of two ppm (part per million) for liquid hand sanitiser but does not have recommendations for others such as sprays.

An eight-ounce bottle of hand sanitiser made by company artnaturals had the highest level of benzene at 16 parts per million. Test results by the online pharmacy were verified by Yale University’s Chemical and Biophysical Instrumentation Center and Boston Analytics, a private laboratory.