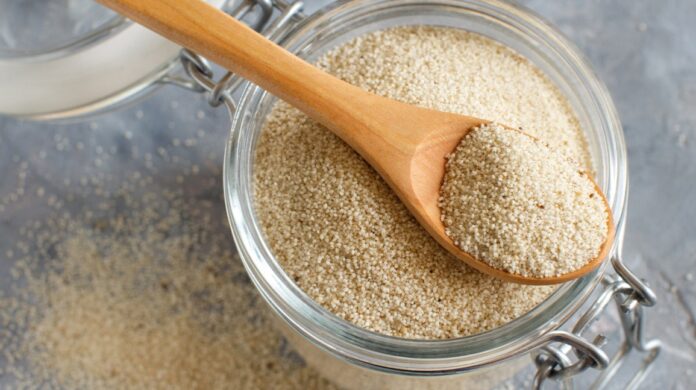 Fonio is a good source of B vitamins, including thiamine, riboflavin, and niacin, which are necessary for the growth, development, and function of cells, as well as energy production (7, 8, 9).

The United Nations Food and Agriculture Organization (FAO) suggests that fonio has the highest calcium content of all grains. This may make it a good choice for those who don’t consume dairy, such as vegans or individuals with lactose intolerance (2Trusted Source, 10).

Fonio provides numerous B vitamins, as well as minerals like calcium, iron, copper, zinc, and magnesium. It offers moderate amounts of fiber and protein.

Although fonio has existed for over 5,000 years, scientific research on this grain is lacking (1).

Some studies suggest that the climate, soil conditions, and farming practices may affect the nutrient content of particular plant foods across Africa (14Trusted Source).

Great source of plant-based amino acids
Fonio is a good addition to the diets of people who don’t eat enough animal or protein-based foods.

Although its protein composition is comparable to that of white rice, fonio contains significantly higher amounts of the sulfur-containing amino acids methionine and cysteine. Both of these amino acids are lacking in grains like corn, wheat, rice, sorghum, and barley (5Trusted Source).

As an essential amino acid, methionine must be obtained through food, as your body can’t make it. It plays a role in skin elasticity, hair growth, nail health, and the growth and repair of body tissues (15).

Cysteine is a non-essential amino acid that’s necessary for protein synthesis and detoxification. It also plays a role in the formation of the amino acid taurine (16).

With the exception of lysine, a typical serving of fonio may meet about 10% of an adult’s daily essential amino acid needs (14Trusted Source).

Whole grain
Fonio is eaten in its entirety and therefore considered a whole grain.

Unlike refined grains in which the germ and bran are removed during processing, whole grains include all three parts of the kernel — the bran, endosperm, and germ.

According to the Whole Grains Council, a nonprofit consumer advocacy group, about 25% of a grain’s protein is lost when the bran and germ are removed. Nutrient losses also occur in many other important nutrients (18).

The U.S. Department of Agriculture (USDA) recommends that whole grains comprise half of your daily grain intake. Including 1/4 cup (45 grams) of dry fonio in your diet can help you meet that goal (19Trusted Source).

Gluten-sensitive individuals may experience abdominal discomfort and tiredness when they eat foods that contain gluten — a group of proteins found in wheat, barley, and rye (20).

Among those with celiac disease, gluten presents the same symptoms as gluten sensitivity but also damages the small intestine (20).

Resistant starches have many health benefits and may play a role in increasing insulin sensitivity and lowering blood sugar levels (21Trusted Source).

Furthermore, this grain has a low glycemic index (GI) score, meaning that it doesn’t quickly raise your blood sugar levels. For this reason, it may help people with diabetes manage their blood sugar (5Trusted Source).

How to use fonio:

Fonio is extremely versatile. When cooked, it has an earthy taste that readily absorbs the flavors of the foods it’s prepared with.

In West Africa, fonio is traditionally cooked as couscous, made into a porridge, and included in local beverages. Like other grains, it can be milled into a flour and used in baked goods, such as bread, cookies, and cakes (22).

In the kitchen, it’s so quick and simple to make that the Bambara people of Mali say that fonio never embarrasses the cook.

Don’t be afraid to experiment with it in your kitchen. Here are a few recipe ideas:

Substitute fonio for any grain, including rice, couscous, millet, sorghum, quinoa, and barley.
Use it in porridge in the same manner in which you’d use oats.
Add it to soups and stews.
Sprinkle it in salads.
Use fonio flour in baked products like bread, cookies, cakes, and bars.
How to make fonio
Bring 1 cup (240 mL) of water to a rapid boil.
Add salt to taste.
Add 1/4 cup (45 grams) of dry fonio, stir lightly, and cover.
Turn the heat to low and cook it until all the liquid is absorbed.
Turn the heat off and fluff the fonio with a fork.
If the dish remains soggy, steam it further.

Mindful eating in times of work from home