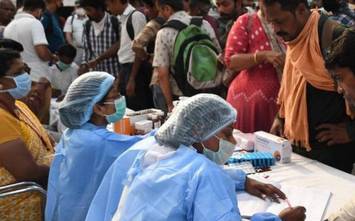 Covid update: India sees lowest new cases in nearly two months, fatalities jump to 3,380
The active tally in the country has slid below the 15-lakh mark to rest at 15,55,248
As many as 20,84,421 samples were tested on Friday

This is the lowest number of fresh infections recorded since 7 April in the country. With the addition of new infections, the cumulative caseload has reached 2,86,94,879.
Further, after dipping to a nearly 37-day low, new fatalities saw a huge jump in the last 24 hours with 3,380 more people succumbing to the disease. This marks an uptick of nearly 660 new deaths, taking the cumulative toll to 3,44,082.

On the brighter side, recoveries outnumbered fresh cases yet again with 1,97,894 between Friday and Saturday. With this, the total number of discharges has reached 2,67,95,549.

There has been a decrease in active cases by more than 21 lakh since the peak on 10 May.

While new infections have been dipping for over 20 days now, the central government has warned that they may spike if Covid-19 appropriate behaviour is not followed and containment measures flouted.

Almost 68% decline has been noted in coronavirus cases since the highest reported peak of cases on 7 May.
The government has also asserted the need for a fast-paced vaccination drive to curtail another wave of the virus.

India has tested 36,11,74,142 samples for Covid-19 until now, according to the Indian Council of Medical Research (ICMR).

While the Centre is indulged in talks with Pfizer to procure its Covid-19 vaccine, a new study in Lancet has shown that the dose is less effective against the Delta variant (also known as B.1.617.2).

The study says that said that the efficacy of Covid vaccines against B.1.617.2 was unknown so it carried out an initial analysis to track serological responses to vaccination.

It concluded that two doses of the vaccine would be better protected against the new strain.

Amid concerns of the third wave, India is looking at its domestic vaccines for the age group of 12 and 15 years to protect children against the virus.
“Not only Bharat Biotech’s Covaxin, but Zydus Cadila’s Covid-19 vaccine is already being tested on children. When Zydus comes for licensure, hopefully in the next two weeks, maybe we have enough data to take a view whether the vaccine can be given to children,” said V K Paul, member (health) NITI Aayog.