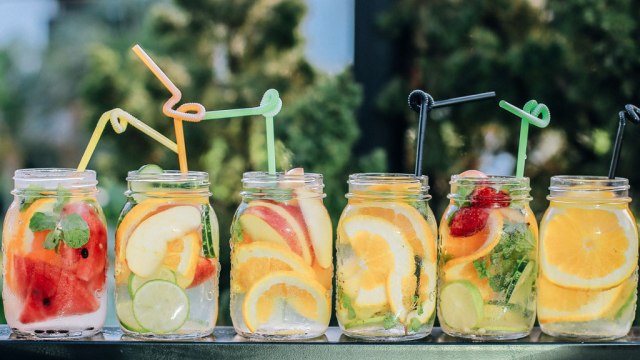 11 Healthiest Drinks for Weight Loss
If you are overweight like 70% of adults in the United States, chances are you have a drinking problem—and we’re not talking specifically about alcoholic beverages. (Speaking of alcohol, do you know What Happens When You Drink a Glass of Wine Every Night?)

No, we mean drinking sugary beverages: On average, Americans get about 7% of their daily calories—that’s more than 100 calories—from sugary drinks, according to the National Center for Health Statistics. And some of us get much, much more.
But when we try to lose weight, we often lose sight of those liquid calories that go down so easily. Most of us focus on cutting back on certain foods or macronutrients when we diet. So, changing what you drink can make a huge difference in your weight-loss efforts. Instead of saying “no” to certain beverages, try saying “yes” to the healthiest liquids for weight loss. Pair these with the 11 Foods You Should Eat Every Day to Lose Weight, and you’ll see the pounds melt off immediately.

1)Plain Water
You might think that a story on what to drink for weight loss would be pretty short and not very sweet. Um. Water. ‘Nuff said, right? After all, water is THE #1 healthiest liquid in the beverage kingdom, making up 60% of YOU!

For weight loss, it can’t be beat. Drink it before a meal and you’ll fill your belly for zero calories and eat less. One study by Virginia Tech researchers found that people who drank 16 ounces of water before meals ate between 75 and 90 fewer calories during the meal and lost roughly 5 pounds more than dieters who did not drink extra water three times a day. Hunger is often a misinterpreted signal for thirst, so staying hydrated will also keep hunger at bay.

Research suggests that about 64 ounces of water a day is ideal for maintaining a healthy body weight and good function of your organs. “The more water you drink, the more weight you may lose,” says nutritionist Ilana Muhlstein, RD, author of You Can Drop It: How I Lost 100 Pounds and You Can Too! “Drink half your weight in ounces, at a minimum, every day,” she advises. For example, a 200-pound person would drink 100 ounces, a little more than 12 glasses.” Stunted weight loss isn’t the only thing you’ll experience if you’re not drinking water; you can also watch out for these 7 Side Effects of Not Drinking Enough Water.

2) Fruit-Infused Waters
fruit water
Shutterstock
Substituting water for high-calorie beverages not only significantly trims the calories of every meal, but it also improves digestion and revs up your metabolism. According to a 2008 study of 173 obese women ages 25 to 50, researchers found that swapping out sweetened beverages with water was linked with weight loss, independent from diet and exercise. “If you’re tired of tap water, spruce up your water with a splash of fruit juices like cranberry, orange, or grapefruit,” says weight-loss coach Autumn Calabrese, author of Lose Weight Like Crazy Even If You Have a Crazy Life. “Or get a large tumbler of ice water and add some of these mix-ins to add flavor and color: frozen grapes, blueberries, raspberries, kiwifruit slices, cucumber slices, mint leaves, orange slices, lime wedges, basil, grated ginger, rosemary, cinnamon, mango slices or pineapple.”

3) Green Tea
Green tea in mugs
Shutterstock
Special antioxidants called catechins which are found in high amounts in green tea, especially matcha green tea, are believed to rev up the metabolism and increase your body’s ability to burn fat. One small study found that women who drank matcha grade green tea before brisk walking workouts burned more fat than exercisers who did not drink matcha. Plus, an analysis of 14 studies published in the Canadian Pharmacists Journal showed that people who drank a high concentration of green tea lost up to 7.7 pounds more than subjects who did not drink green tea.

4) Tart Cherry Juice
tart cherry juice
Shutterstock
Many studies have linked inadequate sleep with weight gain and hampering weight-loss efforts. You may be able to ensure more restful sleep by having a nightcap of tart cherry juice. Eating tart cherries or drinking their juice has been shown to improve sleep quality and duration. Tart cherries contain tryptophan and anthocyanins, two compounds that help the body produce melatonin, a hormone that helps you prepare for sleep. The anthocyanins offer strong antioxidant activity that reduces inflammation, too. In animal studies published in the Journal of Medicinal Food, rats were fed a high-fat diet and either freeze-dried tart cherry powder or a control diet of equal calories but without the tart cherry addition. Only those fed the tart cherries experienced a 9% reduction in abdominal fat and other markers of metabolic disease. Tart cherry juice is just one of The 5 Absolute Best Foods to Eat For Better Sleep.

5) Coffee
cup of coffee
Shutterstock
Your morning coffee may help you slim down, as long as you aren’t pairing it with a glazed donut. A recent study in The American Journal of Clinical Nutrition showed that drinking four cups of coffee every day reduced body fat by about 4%. The finding comes from a 24-week observational investigation in which 126 overweight, non-insulin sensitive adults drank either four cups of regular coffee or four cups of a coffee-like placebo beverage every day. The study was designed to look for evidence that coffee consumption reduces the risk of developing type 2 diabetes. But it resulted in an unexpected finding: a correlation between drinking coffee and a modest loss of body fat. Researchers believe the fat loss wasn’t due to changes in diet and physical activity, but because the caffeine caused the drinker’s metabolic process to ramp up, said study coauthor Derrick Alpert, in the Department of Nutrition at Harvard T.H. Chan School of Public Health. To ensure coffee will help you lose weight, beware of the 7 Things You Should Never Add to Your Coffee.

6) Psyllium Husk Mixed in Water
psyllium husk in water
Shutterstock
Psyllium husk is a type of soluble fiber used in the popular fiber supplement Metamucil that when mixed with water thickens into a gel. In your body psyllium absorbs liquid and can help you to feel full, making it easier to eat less. In a study in the journal Appetite, people who took psyllium husk before breakfast and lunch for three days reported less hunger and increased fullness between meals compared to a placebo. In another study, people with type 2 diabetes who took 10.5 grams of psyllium daily for eight weeks had a lower body mass index compared to people who ate their regular diet for the same period.

8)Coconut Water and Watermelon Water
maron jar mugs filled with coconut water around coconuts
Shutterstock
Adding a regular program of exercise (even walking works) to a diet plan can boost your fat-burning metabolism and speed up weight loss. But unless you’re exercising for more than an hour or in the heat and sweating away a lot of fluid, don’t reach for the sports drinks to rehydrate. Most contain significant amounts of sugar and calories. Water is better. And if you need to replenish some electrolytes, try coconut water or watermelon water. Both “are low sugar good choices for sports of rehydration,” writes physician Mark Hyman, MD, a New York Times best-selling author in his book Food: What The Heck Should I Eat? Watermelon is rich in L-citrulline, an amino acid that helps move lactic acid out of muscles, reducing pain and fatigue. To make your own watermelon water, combine six cups of cubed seedless ripe watermelon and one cup of cold water in a blender or food processor. Blend until liquified.

9 An Organic Plant-Based Protein Shake
Protein shake with almonds and coconut shavings with a paper straw
Shutterstock
Protein is the building block of muscle and it promotes satiety, both of which can help with weight loss. When low in calories, high-protein drinks can be an effective tool for dropping pounds, especially when used as meal replacements and between-meal snacks. A study in the Journal of Nutrition compared beverages made with 56 grams of whey protein and a carbohydrate of similar calories. Ninety overweight participants were randomly given one of these drinks and asked to consume them twice a day. After 23 weeks, the whey protein group had lower body weight by 4 pounds and less body fat by 5 pounds compared to the group that consumed the carbohydrate drink. Whey protein is made from milk and may contribute to inflammation, so consider plant-based protein. Many companies make ready-to-drink vegan protein nutrition shakes from bean and pea proteins. These pack 15 to 20 grams of hunger-satisfying plant-based proteins, plus vitamins and minerals. They also contain 130 to over 200 calories so they work well as meal replacements and high protein between-meal snacks.

10 White Tea
White tea lemon
Shutterstock
You hear a lot about the benefits of green tea, but white tea also contains the powerful fat burning combination of caffeine and the catechin EGCG, which test-tube studies show actually prevents new fat cells from forming. White tea revs up metabolism, supercharging the body’s ability to break down and utilize existing fat for energy, according to a study published in the journal Nutrition and Metabolism.

11 The Carb-Cutter Smoothie
peanut butter strawberry banana smoothie
Shutterstock
Low-calorie smoothies made with satiating protein powders are a great way to fight hunger pangs that might lead you to a bag of chips or a slice of cake. And they’re easy to make. A scoop of protein powder, some frozen berries, and a blender are all you need to make a hunger-busting weight-loss smoothie. Try this recipe from Zero Belly Smoothies. Toss the following in a high-power blender and blend: ¾ cup frozen berries, ½ cup frozen spinach, 1 tablespoon chia seeds, dash of cinnamon, dash of turmeric, 1 cup unsweetened almond milk, 1 scoop vanilla plant-based protein powder. “It’s loaded with nutrients but void of excess calories and sugar,” says nutritionist Amy Shapiro, MS, RD. “The cinnamon helps to balance blood sugar levels and may help with weight loss and the almond milk has fewer calories than cow’s milk and a mild flavor that adds 5 grams of heart-healthy fat but not extra calories.” For more recipes, don’t miss The 25 Best-Ever Weight Loss Smoothies.