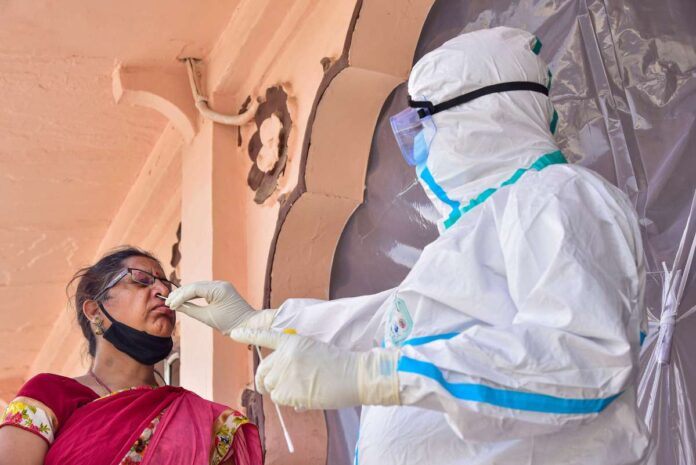 The cumulative number of COVID-19 vaccine doses administered in India has crossed 5.46 crore with 15,20,111 doses being given till Thursday evening, the Union Health Ministry said

The three states, Maharashtra, Kerala and Punjab, also account for 74.32 percent of total active cases in the country which has increased to 3.95 lakh and comprises 3.35 per cent of the total infections.

A total of 53,476 new cases have been reported in a span of 24 hours, the highest single-day rise so far this year.

Six states account for 78.49 per cent of the daily deaths. Maharashtra saw the maximum casualties (95). Punjab follows with 39 daily deaths and Chhattisgarh reported 29 deaths in a span of 24 hours.

Fourteen states and UTs have not reported any COVID-19 deaths in the last 24 hours. These are Jammu and Kashmir, Goa, Uttarakhand, Odisha, Lakshadweep, Daman and Diu and Dadra and Nagar Haveli, Ladakh (UT), Sikkim, Tripura, Meghalaya, Mizoram, Andaman and Nicobar Islands, Arunachal Pradesh and Nagaland.

Maharashtra recorded 35,952 new coronavirus infections on Thursday, the highest one-day rise since the pandemic began. Mumbai city also witnessed a record
rise in cases during the day, health officials said. It took the caseload in the state to 26,00,833. The state has added over one lakh cases in the last four days.
With 111 fatalities reported on Thursday, the death toll reached 53,795.

The number of COVID-19 cases in Pune district increased by 6,432 in the last 24 hours to touch 4,92,694, while the day also saw 42 deaths and 1,200 people
getting discharged, an official said on Thursday. Of the new cases, Pune city accounted for 3,286, Pimpri Chinchwad 1,811 and the rest were in rural and
cantonment areas, he added.

Nagpur city and Nagpur district (barring city) added 2,656 and 1,014 cases, respectively. Pune city reported highest 16 deaths during the day, followed by Nagpur city where 14 people succumbed to the infection. With discharge of 20,444 patients from hospitals, the recovery count in the state increased to 22,83,037. There are
2,62,685 active cases now.

The cumulative number of COVID-19 vaccine doses administered in India has crossed 5.46 crore with 15,20,111 doses being given till Thursday evening, the Union Health Ministry said.

A total of 5,46,65,820 vaccine doses have been given, according to the provisional report till 7 pm.

The ministry said that 60 percent of the cumulative doses (5,31,45,709) have been given in eight states –Kerala, Madhya Pradesh, Karnataka, West Bengal, Gujarat, Uttar Pradesh, Rajasthan and Maharashtra.

Uttarakhand to go ahead with Kumbh amid surge in cases; cuts short duration, makes tests mandatory

The duration of Kumbh Mela in Haridwar has been curtailed to just one month for the first time in its history in view of a recent surge in COVID-19 cases and it has been made mandatory for pilgrims to have a “negative” RT-PCR test report to attend the mega congregation.

According to a notification, the congregation on the banks of the Ganges in Haridwar in Uttarakhand will take place from 1 to 30 April, with three “shahi snan” (major bathing) dates on 12, 14 and 27 April.

Thousands of devotes take a dip in the holy river during the congregation with their number increasing manifold on the days of “shahi snan”. Authorities also expect heavy turnouts on the occasions of Chaitra Pratipada on 13 April and Ram Navami on 21 April.

Held once in 12 years, the congregation usually lasts around three-and-a-half months. Its last edition was held in Haridwar from 14 January to 28 April in 2010.

COVID-19 cases continued to rise again in Uttarakhand with 200 infections reported on Wednesday out of which the maximum was detected in Haridwar which is in the final stages of preparations to host the Kumbh Mela.