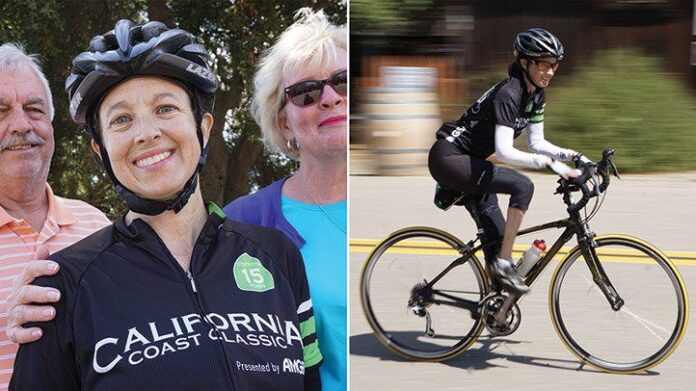 Each year, Jenn Ramsey does the California Coastal Classic, a fundraising bike tour. Winding along Highway 1 from San Francisco to Los Angeles, the ride covers 575 miles in eight days. But it’s been an even longer road for Ramsey to get here.

Jenn Ramsey has not let debilitating ankle pain prevent her from riding her bike, sometimes over 80 miles in a day. In fact, the arthritis in her ankles has been bothering her for so long, she can’t even remember when it began. “I was 13 months old when I was first diagnosed with arthritis,” Ramsey says. “I had some issues with my ankle, and they thought that maybe I had a tumor. One day, I was very listless. My dad told my mom, ‘We have to take her to the emergency room.’ Basically, it was polyarticular juvenile rheumatoid arthritis (JRA), diagnosis by exclusion. They ruled everything else out. The doctor noticed that my arm was contracted, and that’s how they determined that I had arthritis.”

A JRA Diagnosis Reached by Exclusion

Today, there are some things that remain difficult for Ramsey. “It’s hard for me to stand for more than a half-hour at a time,” she says. “My ankles really start to hurt.” But that hasn’t prevented Ramsey from riding her bike. For the last 12 years, she has ridden her bike in the 8-day, 575 mile California Coastal Classic to raise money for the Arthritis Foundation. But the annual event does more for Ramsey than raise funds.

Growing Up With Arthritis in the 1970s

“I had arthritis long before the internet,” Ramsey says. “In 1973, there weren’t as many options. You couldn’t just look things up or find other people like you. We went to Johns Hopkins, and some doctor gave me a crazy amount of aspirin to relieve the pain. I ended up getting a bleeding ulcer from that.”

Gold Injections, Orthotics, Knee Joint Draining: Decades of Treatment Trial and Error
For Ramsey, it’s been years of trial, error, and more trial. “I’ve been on every medicine that came out, as it came out,” she says. “I was in a gold study in Washington, DC, when that was the new treatment. Any arthritis drug that was out there, I was on. It was mostly to treat the pain in my ankles.

I would have my knee drained most of the time. I didn’t have a lot of injections like cortisone. They tried to avoid that. But they would drain my knee frequently. The doctors also had my parents put a bar across the door, so that I could hang on it to help straighten my arms. I had a lot of orthotics — braces that would hold my arms straight to keep them from getting contracted. I would say, ‘At least I’m not in a wheelchair,’ and my mom would say, ‘Well, you were in a wheelchair. You just don’t remember it.’”

Today, there are more effective treatment methods to keep the arthritis under control, explains Ramsey. “Biologics are great, but they come with side effects and serious issues. It’s not a total solution. Sometimes people say, we’ve cured arthritis! But really, you’re just shutting down the symptoms for a little while.”

MOTIVATION STORY | RUN FOR YOUR LIFE