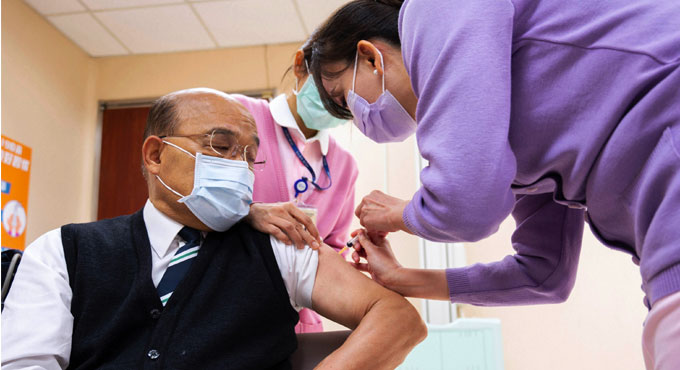 Health care workers received the first shots in Taiwan’s COVID-19 vaccination drive on Monday, beginning a campaign that won’t use supplies from China amid uneven distribution of the vaccines globally.

Taiwan has on hand 117,000 doses of the AstraZeneca vaccine, which it is distributing to healthcare workers across 57 hospitals.
Taiwanese premier Su Tseng-chang launched the drive by receiving the first shot at National Taiwan University Hospital in the capital Taipei. “After 30 minutes of rest, there’s no signs of any discomfort,” he said.

The rest period is for monitoring recipients for any adverse reactions.

Last week, more than a dozen nations suspended use of the AstraZeneca vaccine after a few dozen people among the millions who’ve received the vaccine developed blood clots.

The European Union’s drug regulatory agency concluded after a review it couldn’t rule out a direct link but the benefits of using the vaccine outweigh the possible risks.

The island is planning to administer its full initial supply to 117,000 individuals to ensure the broadest protection. The first dose provides an efficacy rate of 71 per cent and the second dose — meant to be given eight weeks later — boosts its effectiveness to 81 per cent, authorities have said previously.

Taiwan has yet to announce a vaccination campaign for the public.

Countries around the world are scrambling for vaccines, which have been distributed unevenly with rich countries buying up a majority of the doses. China has stepped in to offer hundreds of millions of doses of its own vaccines across the developing world, but Taiwan has refrained from buying them.

Taiwanese law bans import of Chinese vaccines made for human use. The island’s health minister had said in February there were no considerations to amending the law and no experts have made a special recommendation for Chinese vaccines.