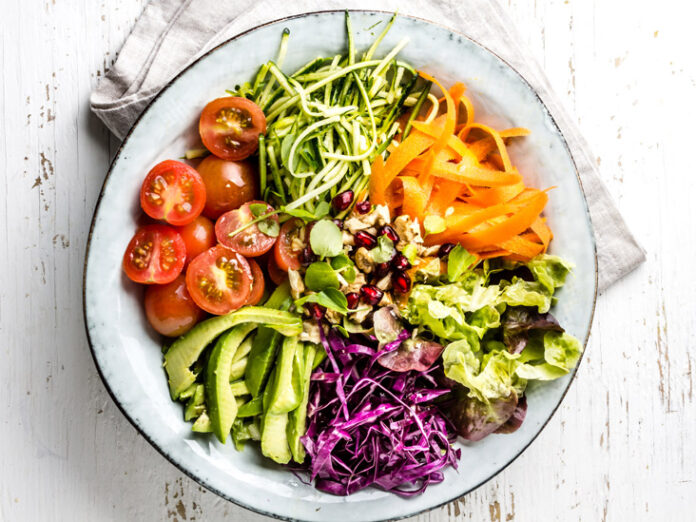 Though the raw vegan diet boasts plenty of nutritious fruits, veggies, nuts, and seeds, leaving cooked foods completely off your plate isn’t for everyone.

For those who love eating but absolutely despise cooking, the idea of never having to attempt to grill a steak to perfection or stand over a piping hot stove for an hour sounds like a dream. And with the raw vegan diet — which involves kicking your typical cooking techniques to the curb and filling up on uncooked items such as fresh, raw produce, nuts, seeds, and beans — that fantasy can be a reality.

But is ditching cooked food entirely all that good for your health? Here, a nutrition expert gives the DL on the raw vegan diet’s benefits and shortcomings, as well as if it’s worth taking on in the first place.

What Is a Raw Vegan Diet, Anyway?

Just by reading the name, you can get a pretty good idea of what the raw vegan diet entails. But to break it down more specifically, individuals following a raw vegan diet avoid all animal-derived products — including meat, eggs, dairy, honey, and gelatin — and consume only plant-based foods, just like regular vegans.

The kicker: These foods can only be eaten raw (read: uncooked and unprocessed), dehydrated at low temperatures, blended, juiced, sprouted, soaked, or heated below 118°F, says Alex Caspero, M.A., R.D., a registered dietitian and plant-based chef. That means processed, heat-treated ingredients such as sugar, salt, and flour; pasteurized non-dairy milks and juices; baked goods; and cooked fruits, vegetables, grains, and beans are all off-limits. (In addition to, of course, all animal products.)

So what does a raw vegan plate look like? A whole lot of uncooked fruits and vegetables, nuts and seeds, and sprouted grains, beans, and legumes, says Caspero. A raw vegan breakfast might contain a smoothie bowl topped with sprouted groats (whole grains that still have the endosperm, germ, and bran) and nuts.

A dinner might be a big salad sprinkled with raw nuts and seeds, she adds.

Now, about that 118°F heat limit. Though it seems oddly specific, there’s a bit of science behind it. All plant foods (and living organisms, for that matter) contain various enzymes, or special proteins that accelerate chemical reactions. These enzymes speed up the production of compounds that give fruits and veggies their signature flavors, colors, and textures and offer some health perks, such as the beta-carotene that gives carrots their orange hue and is converted into vitamin A in the body.

But when a food is heated, the enzymes in it are broken down, which helps make the food more digestible, explains Caspero. “The idea is that if these enzymes are intact, the food is purportedly healthier for the body,” she says. But that’s not exactly the case.

Research does show that enzymes break down at higher temps, with the process starting when the enzymes reach roughly 104°F. For instance, when chickpeas were exposed to 149°F heat for five minutes, one specific type of enzyme inside the legumes was completely broken down, according to a study in the journal PLOS One. However, that doesn’t mean cooked food always has a diminished nutritional value.

A 2002 study found that boiling whole potatoes for an hour did not significantly reduce their folate content. And a separate 2010 study showed that cooking chickpeas in boiling H20 increased the amount of protein and fiber that was bioavailable (meaning the body could easily absorb the nutrient) but reduced the amount of bioavailable magnesium and vitamin K.

TL;DR — The link between enzyme breakdown and changes in a food’s nutritional qualities isn’t so straightforward.