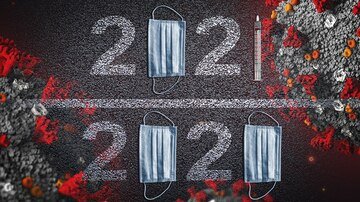 March 2020: We Don’t Think the Virus is Threat to Young People

In his March 11, 2020 address from the Oval Office, former president Donald Trump stressed the need to take precautions to protect the most vulnerable, including the elderly and those with underlying health conditions that put them at increased risk from infection.

“Young and healthy people can expect to recover fully and quickly if they should get the virus,” he said.

That didn’t match what Cleavon Gilman, MD, was seeing every day in the emergency room where he was working in New York.

“Even in March we were seeing young people who were who were getting sick from the virus having to be intubated and die from it,” he said.

Gilman says his 27-year-old cousin, who was trying out for the NFL, was one of them. He began collecting reports of the deaths of younger people and tweeting them to raise awareness.

“That idea that young people are not affected, it promoted places like Florida and Texas from just not having any mask mandates, opening up schools, and now we know it’s not true,” he says.

Over the summer, adults under 30 accounted for more than 20% of all COVID cases in the U.S., according to the CDC. More than 12,000 Americans under the age of 45 have now died from COVID-19.

“Looking back a year later. I think that misinformation and disinformation was you know, another contributing factor to how come there’s over 525,000 Americans dead,” Gilman said.

March 2020: We Don’t Think the Virus Stays in the Air for Long

March 2021: Check Your CO2 Levels and Ventilate Because This Virus Definitely Hangs Around in the Air

In a scientific brief published in March 2020, the WHO cautioned that there was no evidence that the virus was lingering in air and making people sick, though recent experiments suggested that it might be doing just that.

Scientists who study aerosols were dumbfounded.

In a strongly worded letter to the journal Science, Kimberly Prather, PhD, a professor and atmospheric chemist at Scripps Institution of Oceanography, sought to clear the fog. “There is overwhelming evidence that inhalation … represents a major transmission route for coronavirus disease 2019 (COVID-19)” she wrote.

In July, more than 200 scientists signed an open letter to WHO urging the organization to “recognize the potential for airborne spread.”

“We are advocating for the use of preventive measures to mitigate this route of airborne transmission,” they said.

Airborne transmission made proper ventilation of spaces critical, they said.

As a result, in July, WHO revised its guidance on coronavirus transmission saying the virus could remain aloft in indoor, crowded, and inadequately ventilated spaces like restaurants, gyms, nightclubs and places of worship, to name a few.

People were soon buying CO2 meters as a way to gauge how well their indoor spaces were ventilated.

That recognition was a major victory, but still scientists say not enough is being done to mitigate this route of transmission.

More than a year later, schools and workplaces are still using Plexiglas partitions, a precaution that aerosol scientists think does very little to stop transmission, since small particles of the virus can float over and around them.

In a February 2021 letter, they called on the Biden Administration to “take immediate action to protect against this source of exposure.”

“While COVID-19 infections and deaths have started to decline in recent weeks, they remain at a very high level and, unless strengthened precautionary measures are implemented, the new variants will likely bring an explosion in new infections,” the authors wrote.

‘We have to be humble when we deal with these viruses’
What we didn’t realize on March 11, 2020, was that the catastrophe unfolding in Europe was already here.

The virus had already seeded itself across the country. Scientists later estimated the 500 cases and 19 deaths across 34 states that were known to the CDC at the time of the pandemic declaration were only a fraction of the actual number in this country.

After years of starving our public health system of funding, the U.S. was caught ill prepared to deal with a disaster on this scale. Though experts agreed the best way to stop the spread of the virus was to test, trace and isolate infected people, the U.S. did none of that effectively, partly due to lack of political will and adequate resources, partly because public health experts underestimated the virus.

Much of the public health guidance given to the public last year turned out to be incorrect.

“Putting aside rampant disinformation and political interference, the real tragedy was not having any COVID-19 testing for the first 2 months of the U.S. pandemic, which promoted diffuse spread of the virus across the country, and we’ve never been able to contain it since,” said Eric Topol, MD, professor of molecular medicine at Scripps Research and editor-in-chief of Medscape.

“That was the unforgivable mistake … .a fatal mistake for thousands of Americans,” Topol said.

Of course, it wasn’t all bad. The development of the vaccines, which happened with unprecedented speed, was a dazzling achievement.

“It’s astounding, you know, and it’s a testament to the scientific community, the medical community, the regulatory community, the pharmaceutical industry, you know the fact that everybody was able to do this,” on such an accelerated timeline and without compromising safety, “was a very happy surprise,” Heise says.

Now everyone is hoping we can get them rolled out in time.

“I think it’s just a reminder that we have to be very humble when we deal with these viruses. We have, have, to be humble,” said Osterholm.

Some experts worry we will pay a price for these missteps now.

As he has watched the new coronavirus variants emerge, he says he’s realized we’re in a whole new ballgame with COVID now.

“I always give people a disclosure when I talk about these viruses now, that you know, I know less about them now than I probably did 6 months ago. And I think that type of open mind is what’s going to help get us through here and envision what the future might look like and what we have to plan for,” Osterholm said.