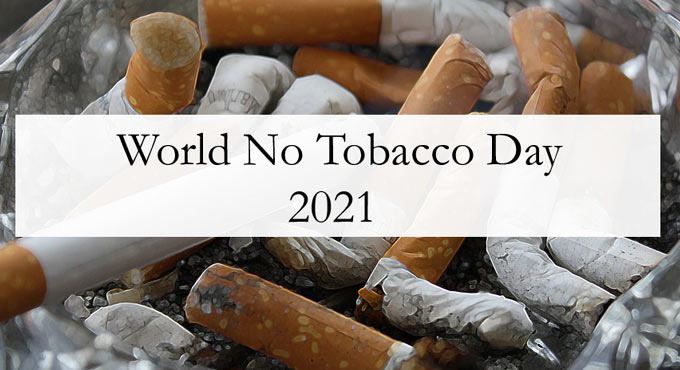 According to WHO, tobacco kills more than 8 million people every year, of which at least 7 million are the direct result of tobacco use, whereas about 1.2 million are exposed to second-hand smoke.

Hyderabad: The World No Tobacco Day is observed every year on May 31 to educate people about the risks of using tobacco and how to lead a healthy life. On this day every year several organisations like, World Health Organisation (WHO) organise campaigns to address theglobal epidemic which is one of the biggest threat to the public.

According to WHO, tobacco kills more than 8 million people every year, of which at least 7 million are the direct result of tobacco use, whereas about 1.2 million are exposed to second-hand smoke.

History
The annual event came into recognition as the Member States of the World Health Organisation marked it in 1987 to create awareness about the diseases tobacco causes and how it can be prevented. The World Health Assembly passed Resolution WHA40.38 in 1987, announcing April 7, 1988 as “world no-smoking day”. Later, Resolution WHA42.19 was passed to observe World No Tobacco Day on May 31 across the globe.

Aim and Objective
Working towards the mission, WHO launched one yearlong campaign last year for World No Tobacco Day with a theme- Commit to Quit. It aims towards 100 million tobacco users to make an attempt to quit and encourage others to take up services which are helpful to quit successfully.

COVID-19 and Tobacco
As the news of COVID-19 pandemic spread, tobacco users across the world were prompted to quit the life threatening addiction. The virus infection reduces lung capacity and increases the risk of respiratory diseases, in turn making one’s body vulnerable and weak to fight against it.

According to Dr Tedros Adhanom Ghebreyesus, WHO Director General, “Smokers have up to a 50% higher risk of developing severe disease and death from COVID-19, so quitting is best ting smokers can do to lower their risk from coronavirus, as well as the risk of developing cancers, heart disease and respiratory illnesses.”

He also said, “We urge all countries to play their part by joining the WHO campaign and creating tobacco free-environments that give people the information, support and tools they need to quit, and quit for good.”

With WHO’s Quit Challenge which is available in WhatsApp, Facebook Messenger, Viber and WeChat, one can get regular notifications for 6 months with tips to remain tobacco free.

Action against Tobacco
Apart from the above mentioned services and campaign, few actions which can lead to cut down of tobacco usage are:

Vitamin D may not protect from Covid infection or severity

Embryos of many species use sound to prepare

How To Get Rid Of Ear Pain Fast At Home